Lynn S. Swigart was born in Kansas City, Missouri, in 1930. He spent his youth in Clinton, Illinois, and graduated from Bradley University in Peoria, Illinois in 1952 with a B.S. in psychology. Swigart lived in Gloucester, Massachusetts, from 1994 to 2017 and currently resides nearby in Ipswich, Massachusetts. His fine art photography is represented by Trident Gallery in Gloucester.

He worked as a professional photographer from 1951 to 1953, and since that time has worked independently. He has studied with Gus Kayafas, Minor White, and George Tice. During the summers of 1973 and 1974 he taught photography at the Multimedia Arts Institute at Bradley University.

Swigart worked for Caterpillar Inc. from 1953 to 1988, his last position being manager of Communications Services. He served on the Arts Committee of the Illinois Arts Council. From 1988 to 1994, he was president of WYD Design Inc. of Westport, Connecticut. He served on the Board of Directors of the Westport Art Center. 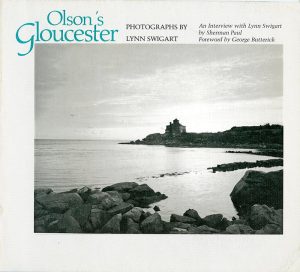